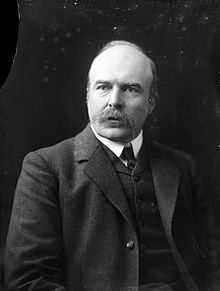 Established in May 1884, at a convened meeting held in the room of Professor James Gow Black, Professor of Natural Science (Chemistry) one of the first four Professors, the University of Otago rugby club is New Zealand's leading club supplier of All Blacks and woe betide anyone who suggests otherwise. In 2003 TV One was made to write a letter of apology when it erroneously said that more All Black representatives have come out of the Ponsonby ranks than any other club in New Zealand.

So you read the truth here. Sixty-nine Varsity rugby players have gone on to become All Blacks, with 45 of these men first donning the black jersey while still playing for the club.

Professor George Samuel Sale, an ex-pupil of Rugby School and first Professor of Classics, was elected first President. He, too, was one of the first four Professors appointed in 1871.

Robert McNab, pictured left, was elected as the first secretary. He played in the first inter-university rugby match in New Zealand, played between Otago University and Canterbury University College in 1886, and scored a try for the Otago team. McNab was later to become historian, lawyer in Invercargill, and a Liberal MP until his untimely death in 1917. He held several Cabinet portfolios and had been acting Prime Minister. The author of several important histories, Robert McNab bequeathed his wonderful and priceless collection of New Zealand books to form the nucleus of the McNab Room in the Dunedin City Library, named in his honour.

Promptly affiliating with the ORFU, the club participated in three interclub fixtures. The first match was against Union 2nd XV on 24 May 1884, lost by 1 try to 2 tries, and was followed by a win over Port Chalmers on 19 July, 1 goal, 3 tries to nil, and a loss to a Dunedin mixed XV on 2 August, 1 goal to 3 goals.

The 1885 season was rather bare: the club was not allocated any inter-club fixtures and the only result recorded in the ORFU Annual was a game against OBHS 1st XV, drawn 1 goal each, while a scratch game was played against a Lawyers team on the North Ground. The club fared little better in 1886, with three results recorded in the Annual, including that first inter-university rugby match in New Zealand. Ten mid-week scratch matches were played on the North Ground. But other clubs were reluctant to accept the University club into the championship for fear of losing players.

Consistency and successes in inter-club games continued to elude the University Club. But matters took a turn for the better in 1897 when the club finished third in the competition with 15 flag points out of 22. Thereafter the club tended to finish in the upper half of the competition. Significant matters helped: first there was proper coaching and secondly, medical students who until 1887 could only attend the University of Otago for a year or so before going off to Britain to complete their studies, now thought it worth their while to complete their studies at Otago, with consequent benefit to University and Otago rugby.

The critical turning point came in 1904 when Dr. Irwin Walter William Hunter, pictured right, who played for the A team in 1893, commenced to coach the A team – a post he held until 1911 when he became club president. Hunter managed the first NZU team to tour Australia in 1908. A lecturer at the Medical School, both he and his brother, Professor Sir Thomas Alexander Hunter (later Vice-Chancellor of the University of New Zealand), were former Otago representatives.

During Dr. Hunter's coaching reign, the A's were premiers for the first time in 1906 and followed it up in the following year. He was probably the first of the serious coaches, and was frequently a sideline general. He was regarded as one of the great rugby thinkers, somewhat ahead of his time. Dr Hunter later published the book, New Zealand Rugby Football – Some Hints and Criticisms describing the game, the meaning of it and how to play it, – with every field position analysed. It was a coaching catechism written to pay attention to something "sane" on the subject "and to save other people the trouble" as he wrote in the preface.

Although it took the club 23 years to first win the Dunedin premiership, it has now won 52 premierships – far ahead of any other Dunedin club – and the greatest number of premierships among the Metropolitan cities in New Zealand.

Among many outstanding "A" teams, the 1993 University A team played 18 matches, scored 841 points, conceded 200, scored 128 tries and conceded only 15 tries, to emphasise that it was the best in the country and capable of beating many International sides. The score in the V G Cavanagh Memorial Trophy against old rival, Southern, was 97-6; and Southern was then defeated 51-10 in the top six section, and 51-8 in the Grand Final. But they did lose one match, when almost all of the team was involved with New Zealand University and Otago fixtures.

With 52 premierships having been won to date, there have been so many outstanding seasons that it is idle to speculate on which was the best. And it should be known that Varsity often played against Sub-Unions, such as Ashburton (now Mid Canterbury), South Otago and North Otago, as well as visiting British naval ships and the rest of "Otago", at the request of the ORFU. One cannot seriously compare one decade with another – different rules, different pitches, different balls and aids and different training opportunities all combine to negate comparisons.